Beside being a city of exceptional history and rich cultural heritage, Zadar is also the urban center of northern Dalmatia and administrative, economic, cultural and political center of the region. It is the fifth largest city in Croatia and the second largest in Dalmatia, situated in the heart of Croatian Adriatic.

It is an intriguing city set on small peninsula  which is easily reached destination by land, sea and air.Zadar has an particularly indented coast.  The archipelago counts 24 bigger and about 300 smaller islets and rocks, 3 nature parks – Telašćica, Velebit and Vransko jezero and 5 national parks – Paklenica, Plitvice lakes, Kornati Islands, Krka and Sjeverni Velebit classifying Zadar and its surroundings at the very top of the Croatian tourist offer. 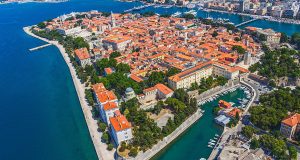 With more than three thousand years old history, Zadar is an ancient city which has survived many destructions and devastations, but each time emerged from the ruins even stronger. It appeared for the first time in history as a settlement of the Illyrian tribe of Liburnians and it has changed its name lots of times through history, so you can find it mentioned in books as Jader, Idassa, Jadera, Diadora and Zara. For more than 1000 years it was the capital city of Dalmatia. Today, Zadar is a Mediterranean  metropolis and a monument of several historic periods and cultures. 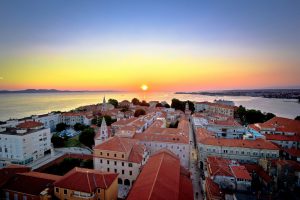 Like a city monument, it is surrounded by historical ramparts, medieval churches, cosmopolitan cafes and quality museums.  But also there is diverser offer of restaurants and cafés.  Zadar gained its urban structure in Roman times; during the time of Julius Caesar and Emperor Augustus, the town was fortified and the city walls with towers and gates were built. On the western side of the town were the forum, the basilica and the temple, while outside the town were the amphitheatre and cemeteries. The aqueduct which supplied the town with water is partially preserved. Inside the ancient town, a medieval town had developed with a series of churches and monasteries being built. During the Middle Ages, Zadar fully gained its urban aspect, which has been maintained until today. In the first half of the 16th century, Venice fortified the town with a new system of defensive walls on the side facing land. In the course of the century architectural building in the Renaissance style was continued and defensive trenches (Foša) were also built. They were completely buried during the Italian occupation until that in 1873, under Austrian rule, the ramparts of Zadar were converted from fortifications into elevated promenades commanding extensive seaward and landward views, thus being the wall lines preserved; of its four old gates one, the Porta Marina, incorporates the relics of a Roman arch, and another, the Porta di Terraferma, was designed in the 16th century by the Veronese artist Michele Sanmicheli. In the bombardments during the Second World War entire blocks were destroyed, but some structures survived. 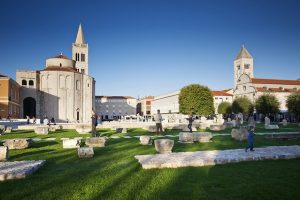 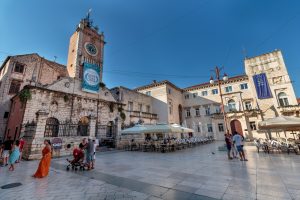 Apart from historical monuments, Zadar also successfully adheres to the newest trends and many contemporary architectural achievements such as the first sea organs in the world.  The Sea Organ transforms waves into mournful melodies (won the 2006 European Prize for Urban Public Space).  Another piece of permanent art in Zadar is „sun salutation“ a circle of glass that captures the daylight and emits it at night. Together with the wave energy that makes the Sea Organ ’s sound, it crate`s a beautiful sound-and-light spectacle. 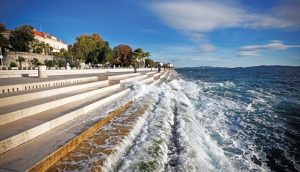 Zadar is also home to one of the oldest universities in Croatia ( dates back to 1396), and there were created the first Croatian novel and newspapers in Croatian language. 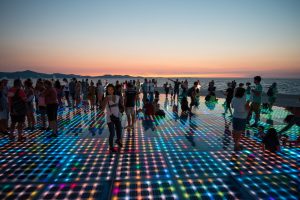 Due to huge space left for pedestrians, people can walk along the cobblestone streets of the city, get in touch with its history and feel the contemporary life of the city.   With everything mentioned above, Zadar is definitely a must see while in Croatia due to its contribution to Croatian history and his unique lifestyle.

If Zadar is next stop on your holiday in Croatia, join us on our Trogir to Zadar with Krka Waterfalls private tour.