The Blue Pearl of the Adriatic...one of the most pitoresque towns in the Mediterranean

Rovinj is one of nine settlements officially designated as towns situated on the west coast of Istria  County in Croatia. Rovinj Archipelago includes 22 islets.

Rovinj’s history stretches back to prehistoric times when the town was an Illyrian settlement populated by the Histri before being captured by the Romans, who called it Arupinium or Mons Rubineus, and later Ruginium and Ruvinium. Originally the peninsula on which the city lies was an island close to the coast, it was connected with the mainland in 1763 by filling in the channel.
Rovinj became part of the Byzantine empire, then in the sixth century part of the Exarchate of Ravenna and in 788 part of the Frankish empire. Then it came under the rule of different feudal lords for several centuries. From 1209 it was ruled by the Aquileian patriarch.
Rovinj became one of the first towns in Istria to fall to Venice. From 1283 to 1797 Rovinj was one of the most important towns of Istria under the Republic of Venice. The city was fortified by two rows of walls with three town gates. The remaining town walls date from this period. Close to the pier one can find the old town gate Balbi’s Arch, dating from 1680, and a late-Renaissance clock tower. The city got its statutes in 1531.
After the fall of Venice and the Napoleonic interlude, Rovinj was part of the Austrian Empire until World War I. Then it belonged to Italy from 1918 to 1947, when it was ceded to SR Croatia within SFR Yugoslavia.

Used to be an island secured by medieval walls, the town had seven gates, three of which have been preserved to this day: The Gate of St. Benedict, The Portica and The Gate of the Holy Cross. The limited space conditioned the construction of narrow houses, narrow streets and small squares making it unique place to visit.

The Old Town itself is of course a must see. The narrow, winding, cobbled streets, crammed-together houses and buildings and picturesque squares, 22 islands and islets, carefully designed parks, the tidiness of its streets, make Rovinj one of the most picturesque and romantic towns on Mediterranean. 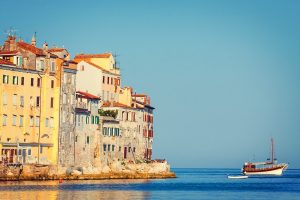 The largest monument in the city, the Church of St. Euphemia is an absolute must see! It is a Venetian Baroque building restored between the 1725 and 1736 and the largest Baroque building in Istria. It is the favorite gathering place of artists from around the world. The Church of St. Euphemia keeps relics of the saint and presents one of the most beautiful Baroque achievements in Istria. Built according to plans by Venetian architect Giovanni Dizzi, the bell tower on the church is a copy of the one at St Mark’s Basilica in Venice and at 61 meters high is the tallest in Istria. On top of the tower there is a large copper statue of St. Euphemia that was set in 1758 after the wooden statue was destroyed by a thunder. The statue is mounted so it moves according to wind direction. There is a wonderful view from the tower accessible from inside the church.

The Balbi Arch (Croatian: Luk Balbi) is from 1680 and is located at the spot which was once the entrance to Rovinj. The arch contains the coat of arms of the noble Balbi family and the Lion of Saint Mark, a symbol of the Venetian Empire.

Ulica Grisia is one of the main thoroughfares through the old part of town and gets very busy during summer when an open air art festival is held.

The Town Museum is home to various archeological findings, and paintings and sculptures.

Rovinj Aquarium is one of the oldest in Europe, dating back to 1891. It houses various flora and fauna from specimens from around Rovinj and Istrian waters.

Visit this Istrian gem by joining us on Trogir to Rovinj with Plitvice Lakes private tour.