Categorized as a medium-sized European city, with population of 300,000, Ljubljana offers everything a metropolis does and yet preserves its small-town friendliness. Ljubljana is, indeed, a people-friendly city, as its inhabitants and numerous visitors will tell you. 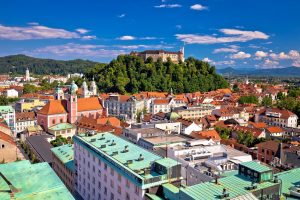 In Ljubljana the old meets the new and the city has preserved evidence of a five thousand year history. It has managed to retain traces from all periods of its rich history; including the remains of the Roman city of Emona and the old city center with its medieval castle, through to the Renaissance, Baroque and Art Nouveau periods characterized in the house facades and ornate doorways of the city center, decorative portals and uneven roofs. Other significant bits of the city mosaic are picturesque romantic bridges across the Ljubljanica river and the vast Tivoli park, which stretches into the very city center. Here eastern and western cultures met; and the Italian concept of art combined with the sculptural aesthetics of Central European cathedrals. Ljubljana’s present appearance is partly due to the Italian Baroque and partly to Art Nouveau, which found expression in numerous buildings constructed after the earthquake of 1895. In the second half of the 20th century, it was the world famous architect Jože Plecnik that put an indelible personal stamp on his native Ljubljana. The city’s appearance was further shaped by his students and a new wave of renowned young Slovenian architects.

Ljubljana’s character is mainly due to a unique and felicitous mixture of two very different but complementary features: on the one hand, the city is famed for its historical heritage and tradition, but on the other, it is a relatively young city with a modern lifestyle whose residents’ average age is only slightly above 30. 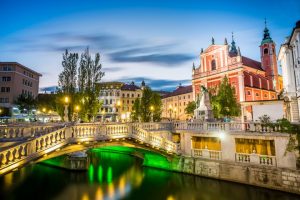 The famous symbol of Ljubljana is the dragon. The history of the iconic monster dates back to tales of Jason and the Argonauts. It’s said that Jason sailed up the Danube, then the Sava and then the Ljubljanica before finally having make the journey to the Adriatic with their dismantled boat being dragged with them. On route they came across a lake that housed the Ljubljanan dragon. The gallant Jason is said to have fought bravely against the beast before finally slaying it. It has thus become a symbol the city. 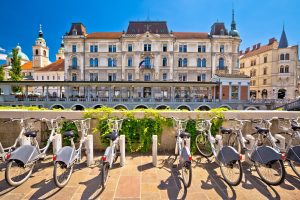 Ljubljana is a city of culture. It is home to numerous theaters, museums and galleries, and boasts one of the oldest philharmonic orchestras in the world. For the people of Ljubljana culture is a way of living and thinking and is very much a part of everyday life. Over 10,000 cultural events take place in the city every year, among which there are 10 international festivals. The inhabitants of Ljubljana and its visitors can admire artists from all the different fields – from music, theater and fine arts to the alternative and avant-garde. In warmer months, the tables and chairs of the numerous cafés fill the banks of the Ljubljanica and the old city markets. It is here, after an almost obligatory Saturday visit to the Ljubljana market or the Sunday flea market, that the locals meet for a morning coffee or for an evening chat with friends.

Join our Slovenia and Istria with Plitvice Lakes 3 day private tour which includes a visit to Slovenian capital.