A genuine trademark of Trogir sculpting is Master Radovan, the most important sculptor of Croatian medieval art. He signed his name on the main portal of the cathedral in Trogir (main west portal of St. Lawrence cathedral) in an inscription that runs under the lunette and reliefs of the Annunciation at the side, where he is celebrated as “the best of all in this art“ (cunctis hac arte preclarum). Most of the portal was carved by the master himself.  Finished and signed in 1240, it is a monumental and unique work of this great Croatian artist.

Beside the portal, standing on the backs of two lions, stand the figures of our sinful ancestors, Adam and Eve.

In the center of the upper zone of the portal is a lunette in which Radovan managed to link into a united composition the scenes of Nativity, the Journey of the Magi and the Adoration of the Shepherds. At two ends at base of the arch that has wound around the lunette the master has shown the Annunciation, in the middle of the arch the Adoration of the Kings, to the right Joseph’s Dream, and at the sides groups of angels celebrating.

Radovan’s lunette is the first European tympanum that takes the Nativity as the central theme of a whole facade. The starting point for a reading is the lunette – carved „a double face“ with a depiction of the Nativity on the front with a cross sign at the rear, one and the other provided with uncommonly exhaustive doctrinal declarations. The external frame of the portal is powerfully signaled with lion sculptures on brackets. 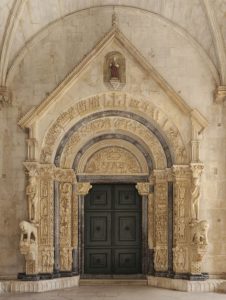 To the right is a lion crushing a dragon, to the left a lioness holding a lamb in her paws, while two cubs sleep below her. At the base of the portal eight telamons are carved, bearing the pilasters of the portal on theirs backs. On the front side of the pilasters along the door is an incomplete cycle of the months (March and April on the left, December, January and February on the right), shown through activities associated with them and the appropriate zodiacal signs. In the whole of the bottom zone is a system of scenes with the topic of sin and the state of the human race before the first laws were made.
Today’s portal unit was not created all at once. The original architectural and iconographic program of the portal was considerably expanded in the last third of 13th century. Several craftsmen worked on the making of the new early Gothic frame; the contents of it underline the theme of a Sin and Redemption.
The statues of the naked Adam and Eve, placed on the lions, represent Original Sin, and the scenes of the Incarnation and the Passion tell of the Redemption of Man. On the external pilasters (where Radovan had meant to show the other seasons) are six carved apostles, also an incomplete sequence, mediators of the Redemption. At the other external arch that develops around the lunette in the core of the upper scene are a number of other scenes in sequence: the Flight into Egypt (left end), Baptism in Jordan (opposite side), Temptation in the Desert (above the Baptism), and Entry into Jerusalem, Washing of the feet, Arrest, Flagellation, Crucifixion and Resurrection with the Three Marys.
The successors of Radovan should also be attributed the construction of the whole forecourt of the cathedral as well as the ciborium and the octagonal pulpit in the interior.

Learn more about it with us on our Trogir private walking tour.