The best preserved monument of the Roman architecture

The central part of the city of Split is a whirl of narrow stone streets, ancient monuments and medieval buildings. The main monument is a palace, the core upon which the city grew. Well preserved until today, remains of ancient buildings, along with late medieval extensions are valuable archaeological and historical-artistic complex which are on UNESCO’s World Heritage list since 1979th.

Diocletian’s palace is named after its creator, the Roman Emperor Gaius Aurelius Valerius Diocletian. It was created as a result of the imperial ambitions that, in his hometown on the Adriatic coast, in the province of Dalmatia, he built himself a mansion in which he wanted spend old age. Another reason probably is either an abundance of high quality stone building, mild climate and sources of thermal waters which are rich in sulfur, and that the emperor should facilitate nursing problems. 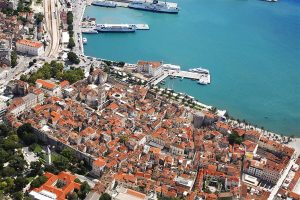 It is assumed that the works on construction of the palace began in 295th after Diocletian reformed the authority of Empire and introduce tetrarchy (governance of Four). Emperor pulled up to the palace after his abdication, in 305th. According to the stones on which are engraved the names Zotikos and Filotas and many Greek letters, it is certain that the empire hired craftsmen from the East part of the Empire. They transported building materials from the quarries on the island Brač and from Seget village near Trogir. The palace is decorated with a variety of import detail: granite columns and sphinx of Egypt, marble from Italy and carved decorations with Prokoneza island in the Sea of Marmara. Although the palace was primarily for residential use, it was very similar to the castrum – a Roman military camp. The reason is its location in a remote area, 6 miles from Salona, the capital of the province, and also probably due to Diocletian’s military mentality. The palace was surrounded by walls of dimensions 175-181 x 216 meters, which are the corners of a rectangular fortified bastions. Any land gate of the palace were further secured by two octagonal towers. Furthermore, the two main streets in the palace: cardo and decumanus match two main streets of every Roman military camps via praetoria and via principalis…

The palace has four entrances, three on the mainland and one from the sea. The eastern and western entrance to the palace are called Porta argentea (Silver Gate) and the Porta ferrea (Iron Gate). The entrance from the sea side is called Port aenea (brass doors), while the main, north, entrance to the palace, called Porta aurea or the Golden Gate. Decumanus street, which connects the eastern and western entrance to the palace, is functionally divided into two parts: the northern buildings for servants and army warehouses, etc. and south, which was intended for the imperial family. Cardo Street began at the golden gate and led to the Peristyle, surrounded by arcades of open space in front of the emperor’s apartment. On the left side of the Peristyle was built monumental octagonal mausoleum of the emperor, and on the right side Temple of Jupiter, Kibelin and the Temple of Venus.  The emperor’s apartment is entered through the peristyle of the vestibule. 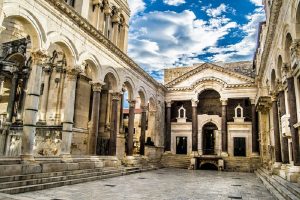 The entire palace complex as a whole is a role model in the antique building, which was the result of a specific function and position adjustment. An outstanding example is the late Roman architecture, when the desire for exuberance and picturesque forms prevailed over the clarity of previous periods.

The emperor Diocletian died in 316th. The life in the palace since it continues to provide refuge for exiled members of the imperial family. A key event was the fall of Salona in the hands of the Slavic tribe when it expelled the population found refuge within the walls of the palace. It started new urban life and the emergence of the new town of Split. In the medieval period between the XII. and XIV. century, the palace comes to a new dimension of development, when the remains of Roman buildings and most of the free space of streets and porches replaced the medieval stone houses. Emperor’s mausoleum was turned into a Christian cathedral, and began construction of the Romanesque bell tower of St. Duje. Romanesque art is represented in the works of Andrew Buvine and George Dalmatian who built the cathedral, bell tower and luxurious aristocratic palaces.