The most important architectural achievement of the Renaissance on Croatian soil

Cathedral of St James in Sibenik

Cathedral of St. James in Sibenik is the most important architectural achievement of the Renaissance on Croatian soil. Due to its exceptional value, this Gothic-Renaissance monument is on UNESCO’s World Heritage list since 2000th. 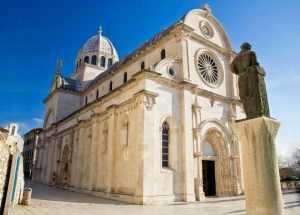 In 1298. Šibenik diocese was founded. Since the existing of St. James Church it was small and unsuitable for the cathedral, it was decided that the bishop and the city provide resources for the construction of a new cathedral. The decision to start to build the cathedral was made in 1402, but the actual work began in 1431.

Šibenik’s St. James’ Cathedral was constructed over a period of a century (till 1453.), and is testimony to the determination, sacrifice and belief of the generations of inhabitants of Šibenik.

Three masters – Francesco di Giacomo, Georgius Mathei Dalmaticus and Niccolò di Giovanni Fiorentino – developed a structure built entirely from stone and using unique construction techniques. Interior of the cathedral is imbued with decorative elements of Gothic and Renaissance art. The Cathedral of St James in Sibenik is a unique testimony of the transition from the Gothic to the Renaissance period in church architecture. Inside the cathedral there are four large, evenly matched columns on which the dome rests. 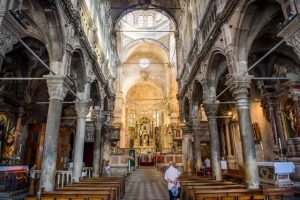 During the shelling on Sibenik the dome of the church was heavily damaged, but it was repaired so the damage is not visible.

By many things it is unique not only in Croatian architecture, but in European architecture too: it is entirely built of stone, no other material was used; it is unique in its brave structure of stone slabs and ribs, with no binding material; it is also unique among renaissance churches in its trefoil front facade; finally, it is unique in the harmony of its architecture and the row of 71 realistic sculptural portraits around the apses. 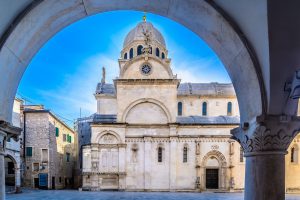